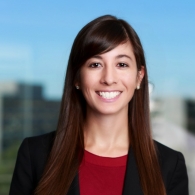 At graduation, Alyse received the 2014 Elizabeth Maxwell Carroll Chestnut Prize, known as the “Dean’s Award,” for her scholarship, professionalism, and excellence in writing. She was also awarded the Joseph Bernstein Prize for legal writing and the William P. Cunningham Award for exceptional achievements and service to the law school.

Alyse L. Prawde In the News

All Blogs by Alyse L. Prawde