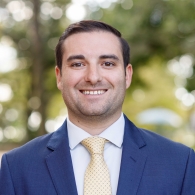 Matt is an Attorney in Joseph, Greenwald & Laake’s Workers’ Compensation and Personal Injury practice groups. Matt joined the firm as a result of the merger of his prior firm, Inman Kaminow, P.C., into JGL. At Inman Kaminow, Matt served as an associate handling a wide range of personal injury and workers’ compensation litigation matters.

During law school, Matt served on the executive board of his law school’s moot court team for two years. Additionally, Matt was selected to compete in the American Bar Association’s (ABA) National Appellate Advocacy Competition – the ABA’s premier national moot court competition. Here, Matt competed against students from law schools across the country where he argued Fourth and Eighth Amendment issues. During law school, Matt also served as a law clerk for multiple firms in the D.C. area, where he handled a variety of complex litigation matters in military law and immigration law.

In his personal time, Matt can be found rooting for his favorite sports teams, playing golf, enjoying the outdoors, or spending time with friends and family. He brings to JGL a commitment to client service, attention to detail, and complex problem solving.