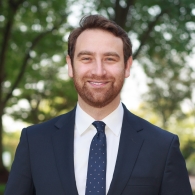 While in law school, Samuel served as a legal intern at the Department of the Interior, a research assistant for Professor Danielle K. Citron, a judicial intern for Judge Richard D. Bennett of the U.S. District Court in Baltimore, and an intern for the Maryland Office of the State Prosecutor. Not all at the same time, of course. After graduating law school, Samuel clerked for Judge Daniel A. Friedman, a judge on the Maryland Court of Special Appeals. As a law clerk, Samuel helped Judge Friedman prepare for oral arguments in civil and criminal appeals, and write opinions in those cases.

Samuel lives in Baltimore with his wife Cyleena, their cat Layla, and their dog Leo.

Samuel Morse In the News

All Blogs by Samuel Morse