Snapchat, the popular social networking application, is unique in that the messages sent over the app “self-destruct” seconds after being opened.  Snapchat also provides its users with a series of “filters,” one of which superimposes the speed at which a user was travelling over a photograph or video.  In other words, if you take a selfie as a passenger in a car travelling 35 miles per hour, and the “miles per hour” filter is engaged, the app will use the camera to recognize how fast your vehicle is travelling and “35 miles per hour” will be superimposed over your picture.   This filter was pushed to users in a 2013 product update[1].  Snapchat users can win virtual “trophies” by sending photographs using filters.  As one lawyer described it, “Snapchat has embedded [incentives] into its interface.  It’s become more of a game[2].”

Recently, Snapchat has been implicated in a series of auto accidents around the world.  This past December, three people were burned alive in Philadelphia when their vehicle crashed into a parked tractor-trailer filled with dangerous chemicals[3].  It is believed that the driver of the vehicle was using Snapchat at the time of the accident.  Last summer, a young woman in Brazil broadcast her accident over Snapchat, documenting that she was travelling 110 miles per hour at the time of the crash[4].  In 2014, a 19-year-old in Manchester, UK using the Snapchat speed filter “snapped” that he was driving 142 mph.  He was involved in a fatal accident the very next day while travelling 80 mph[5].  In light of these accidents, a petition posted on www.change.org called for Snapchat to remove the speed filter from the app and received over 2,400 supporters[6].

Perhaps the most serious accident involving Snapchat took place on September 10, 2015 in Hampton, GA.  In that accident, Crystal McGee, an 18-year-old driver, allegedly struck a vehicle driven by Wentworth Maynard while using the Snapchat speed filter.  It is believed that Ms. McGee was travelling 113 miles per hour at the time of the accident and that she was purposefully driving as fast as possible so as to be able to post an impressive speed on Snapchat.  Incredibly, Ms. McGee continued using Snapchat in the moments following the accident, posting a selfie from the ambulance transporting her from the scene.  The caption of the photo reads, quite appropriately, “Lucky to be alive.” 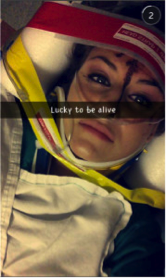 As a result of the accident, Mr. Maynard sustained a severe traumatic brain injury requiring a five week stay in intensive care along with a lengthy and painful rehabilitation process.  Suit has since been filed[7] by Mr. Maynard in the State Court of Spalding County, Georgia against Snapchat alleging that the Snapchat speed filter “motivated” Ms. McGee to drive negligently and was the “critical cause” of the crash[8].  Suit also was filed against Ms. McGee individually but it is not believed that she has sufficient insurance coverage or assets to compensate Mr. Maynard for his catastrophic injuries[9].

Snapchat has not commented on the Georgia suit, but issued a statement stating: “No Snap is more important than someone’s safety.  We actively discourage our community from using the speed filter while driving…”[10] As of March, 2016, Snapchat displays a warning message that reads “Do Not Snap and Drive” if a speed greater than 15 miles per hour is detected by the filter[11].  Had such a warning been in place sooner, Mr. Maynard’s injuries may have been avoided.

The Georgia suit is early in litigation and we will be sure to provide updates as the case progresses.  It would not be surprising if the case were to end up on appeal.

Suits against Snapchat deriving from auto accidents are an extremely recent phenomenon and we are not aware of any such suits currently pending in Maryland.  It would be interesting to see how a Maryland court would handle a case similar to the case in Georgia.  Maryland’s distracted driving law is among the toughest in the country, prohibiting the use of any “text messaging device to write, send, or read a text message or an electronic message while operating a motor vehicle in the travel portion of the roadway.”[12]  As such, the potential liability of Snapchat in a Maryland case would be a question of duty; whether Snapchat has a duty to foresee that the speed filter would encourage drivers to operate their vehicles at excessive rates of speed and in direct contravention of the law.  That may be a harder argument to make in a state like Maryland (and Georgia, as it turns out) where any use of a text messaging device while driving is illegal.  As the Maryland Court of Appeals has held, “there is no duty to control a third person’s conduct so as to prevent personal harm to another, unless a ‘special relationship’ exists either between the actor and the third person or between the actor and the person injured.”[13]  “Under all ordinary and normal circumstances, in the absence of any reason to expect the contrary, the actor may reasonably proceed upon the assumption that others will obey the criminal law…”[14]   This language would seem to limit Snapchat’s duty to foresee the allegedly negligent conduct of drivers such as Ms. McGee.

Joseph Greenwald & Laake, P.A. handles auto accidents throughout Maryland and the District of Columbia.  If you have been injured in an automobile accident, please call our personal injury team at (301) 220-2200.