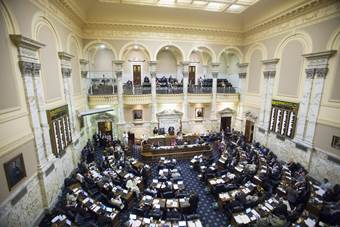 The enacted legislation ranges from merely ceremonial (for example, House Bill 346 which changes all references in the law to a circuit court and juvenile “master” to “magistrate”) to having a serious impact on individuals seeking a divorce (Senate Bill 472 allows individuals, in certain circumstances, to forgo the one year separation period now required for an absolute divorce if the parties mutually consent to the divorce).

Many individuals seeking a divorce in Maryland will be happy to learn of the newest ground for divorce, mutual consent, as a result of Senate Bill 472 (available here). However, there are important limitations on those who may obtain a divorce on this ground, which may rule out many prospective litigants.  In order to obtain a divorce based on mutual consent, the parties cannot have any minor children, the parties must have a written agreement resolving all issues relating to alimony and property (and neither party has filed any pleading to set aside the settlement agreement prior to the divorce hearing), and both parties must appear at the uncontested divorce hearing.

As financial constraints often prevent the parties from physically separating, this ground for divorce, which is silent as to the general requirement of physical separation, will be very attractive to many individuals with limited funds. However, it is not clear exactly how many people will be able to take advantage of this new ground for divorce, as Senate Bill 472 is not clear on whether the parties must be separated at the time of the uncontested divorce hearing or if the parties can obtain a divorce while still residing under the same roof.

House Bill 1185, available here, will also be of particular interest to individuals seeking a divorce that may have resided in the DMV area for many years, but are new residents to the State of Maryland. Residents of the DMV are so accustomed to crossing state lines on a regular basis that they may not realize that a move just up the street from Tenleytown in the District to Chevy Chase, Maryland will cause the clock to begin ticking in Maryland regarding the residency requirement for the filing of divorce. Previously, an individual had to reside in the State of Maryland for a year before they could file for divorce. House Bill 1185 allows an individual to file for divorce in Maryland after residing in the State for six months.

Maryland Rule 2-131(b), available here, permits a family law attorney to enter his or her appearance on a client’s behalf for a limited purpose. The new rule would allow litigants to hire an attorney to provide limited services, and therefore, at a seemingly limited cost. This may be most enticing to individuals who would normally not be able to afford to retain counsel to represent them in their divorce litigation. For example, in theory, a client could hire a divorce lawyer to argue a certain motion in a case in front of the court, to attend mediation, or, with leave of court, the attorney may act on the client’s behalf with regard to a specific issue or a specific portion of a trial or hearing.

However, it is not clear how exactly this type of arrangement would work in practice, especially in the area of family law, where so many of the issues are intertwined (for example, the court’s determination of custody directly impacts the court’s decision regarding the use and possession of the marital home). An arrangement for a limited appearance also has the potential to mislead both the attorney or the client regarding the scope of the attorney’s role and may not be the bargain the client anticipated, if expectations are not clearly defined before the commencement of the representation. The rule requires that the client sign an Acknowledgment of Scope of Limited Representation and that this Acknowledgment be filed with the court along with the attorney’s notice of appearance. Although the rule includes an example Acknowledgment, it would behoove both the attorney and client to create a more detailed and comprehensive agreement to prevent confusion down the line.

While only time will tell how these legislative changes will impact litigants filing for divorce in Maryland, it appears that the legislation is attempting to ease and expedite what is often a difficult and confusing process for many individuals.

For more than 43 years, Jeffrey N. Greenblatt has focused exclusively on representing individuals in complex, emotionally-charged family law matters in Maryland. Jeffrey has extensive trial experience and has negotiated out-of-court resolution experience in every type of family law dispute that impacts his clients’ lives, with a strong emphasis on the following: