Why the State of Maryland Believes Interest is a One-way Street. 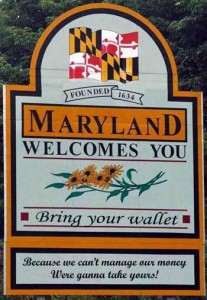 Well, if you paid Maryland estate tax, not so fast.

The Comptroller of Maryland’s official position is that interest that accrues due to a late payment of Maryland estate tax is not refundable, even if the estate tax that generated the interest is refundable.

For example, an estate tax return is filed on behalf of a decedent’s estate. The return reflects a tax due in the amount of $400,000. As a result of an innocent error by the Personal Representative, the Maryland estate tax return is filed late and thus incurs penalties and interest. The Personal Representative pays the amount due, which includes interest of $50,000. Subsequently the Personal Representative realizes that the return included property that did not belong to the decedent and as a result the estate actually owed no tax at all. An amended estate tax return is filed, reflecting no tax due and requesting a refund of the tax, penalties and interest previously paid in error. The Comptroller, following the current policy, would refund the tax paid, have the authority to make a determination about whether to refund the penalties paid, but, under these circumstances, retain the interest paid, even though the tax for which the interest was generated, was never actually due. In other words, while the taxes will be refunded, the Comptroller will always keep the interest even if it never should have been paid to the State.

The Comptroller of Maryland’s policy relies on a Maryland Court of Appeals decision from 1972, Comptroller of the Treasury v. Campanella[1]. In Campanella, a timely estate tax return was filed on behalf of the estate. During an audit of the return, it was determined that additional estate tax was due; however by the time the determination had been made and the additional tax paid, the filing deadline had passed and thus interest was due on the additional tax. Subsequently, additional inheritance tax was paid, which reduced the estate tax due. As result, the Personal Representative requested a corresponding refund from the Comptroller along with a refund of the interest paid on that portion of the tax. The Comptroller refunded the tax but refused to refund the interest. The taxpayer appealed the decision to the Maryland Tax Court and the case ultimately came before the Maryland Court of Appeals.

The Court of Appeals found that while the interest assessed on estate tax paid after the statutory deadline was referred to as “interest” and calculated as interest generally is, it was in fact a “penalty” used to ensure timely payment of taxes due. “However, the example cited by the taxpayer and the argument sought to be drawn therefrom, dismisses too lightly the need for the State, in the orderly administration of its fiscal affairs, to establish definite filing dates for tax returns and tax payments which are meaningful. To accomplish this, it is an almost universal practice for governments to impose charges which are incurred when filing or payment is delinquent. This practice serves as an inducement for the taxpayer to be prompt in payment or otherwise incur a penalty in the event that he is tardy.”[2]

The Court then stated that, “All refunds of State taxes are matters of grace with the Legislature,” and went on to review the Maryland statute regarding the imposition of estate tax as well as any refunds. The Court stated that it was unable to find any authorization in the statute that would allow for a refund of interest paid under these circumstances. The Court  closed with, “Should the feeling generally persist that an inequity to the taxpayer exists under Section 5, although it is not all that apparent to us, we suggest that, insofar as future taxpayers are concerned, relief may lie with the Legislature.”[3]

So, be warned, when it comes to estate tax, the Comptroller of Maryland has no intention of refunding any interest you may have erroneously paid, because it is actually a penalty; however they may very well refund the penalty you paid, because well, that is a penalty.

Reed Spellman is a senior counsel in Joseph, Greenwald & Laake’s Estates and Trusts practice. He counsels individuals and families in a wide range of estate planning and post-mortem planning issues, including anything from a simple will to advanced tax planning, as well as probate administration, trust administration, and estate tax filings and issues.