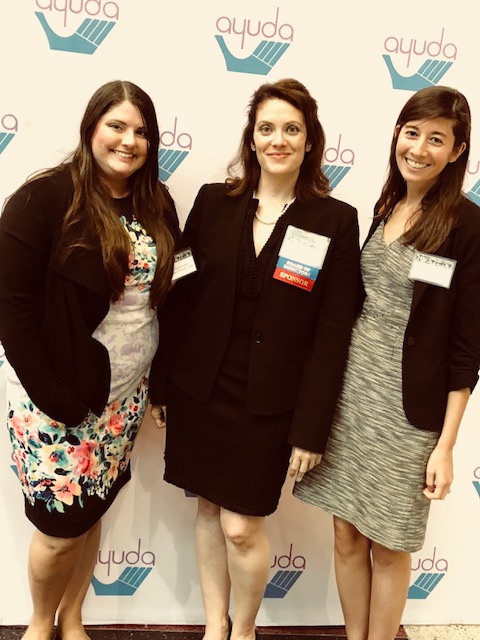 On May 16th, Ayuda celebrated its 45th anniversary. Ayuda is an organization that strives to assist immigrants in the Washington, DC. metropolitan area overcome obstacles to becoming a part of their surrounding community. Joseph Greenwald & Laake was a sponsor of the gala event and partner Veronica Nannis, a new Ayuda Board member, spoke at the event as well. “I am so proud of Ayuda and what the organization, the staff and the supporters have done,” Nannis said. “The immigrants in our communities cannot be forgotten or abandoned. Ayuda has long been a champion for immigrants’ rights and that is why I stand with it.”

The anniversary event, also attended by JGL staff and attorneys, included a reception and awards program to honor the dedicated men and women who have contributed to the organization’s success. Ayuda states, “We dedicate Ayuda’s 45th anniversary celebration to our community of immigrants. This event marks the beginning of a new era of strategic growth – taking us to our half-century milestone with a solemn promise that we will always help vulnerable immigrants in our community overcome barriers and achieve their dreams.”

Since it’s inauguration in 1973, Ayuda has been committed to helping low-income immigrants in and around Washington, D.C. It has helped over 100,000 immigrants from 104 countries by providing legal, social and language services. Nannis and other attorneys and staff from JGL recently partipcated in one of Ayuda’s free legal clinics, which helped some 50 individuals learn their immigration rights.

Nannis is a member of Ayuda’s Board, and has a history of working with the organization. Last year she hosted an educational welcome breakfast and co-sponsored Ayuda’s 44th Anniversary event.