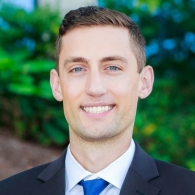 Kevin is an associate in Joseph Greenwald & Laake’s Civil Litigation Practice group and joined the firm after completing a clerkship with the Honorable Sharon V. Burrell in Montgomery County, Maryland.

Kevin grew up in Maryland but chose to attend the University of South Carolina where he studied Insurance and Risk Management at the Darla Moore School of Business.  After graduating from the University of South Carolina, Kevin studied law at the University of Maryland School of Law where he focused on litigation throughout his tenure.  After serving as an associate editor, and being published in the Journal, Kevin was selected by his peers to serve as Editor-in-Chief of the Journal of Business and Technology Law.  During his tenure he shifted the Journal’s focus to the intersection of law and emerging technologies such as automated vehicles and augmented reality.

Kevin was also selected as a member of the Moot Court Board after competing in the Myerowitz Moot Court Competition.  He represented the University of Maryland in the Burton D. Wechsler Moot Court Competition at the American University Washington College of Law where he argued First and Fourth Amendment issues.   As a member of the Public Health Law Clinic, Kevin worked with issue advocates to protect students in school and provided testimony on House Bill 486.  Kevin was present when the bill was signed into law by Governor Hogan on April 18, 2019.  Upon graduation, Kevin clerked for the Honorable Sharon V. Burrell in the Circuit Court for Montgomery County, Maryland where he oversaw criminal and civil jury trials throughout the COVID-19 pandemic.