I Promise to Pay: How a Bank can get your Money Even After Your Home is Sold at a Foreclosure Sale 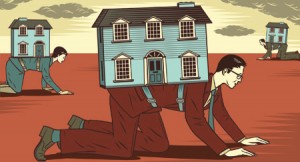 Foreclosure. It was a relatively rare term just a few years ago but as we all know, with the collapse of the economy and the burst of the housing “bubble,” came the increase of foreclosures and bank-owned properties all over the United States.

In 2013, approximately 462,970 homes were repossessed by banks in the United States.  Luckily, the average number of foreclosures has decreased in many states. Unfortunately, Maryland has not fared as well. In 2013, Maryland reported an increase in its foreclosure sales by 117%! This means that defaults, short sales, and foreclosures are still a very real issue for many Marylanders.

However, the bigger question isn’t what happens if you lose your house to foreclosure; it’s what happens after a foreclosure. Many people believe that once their house is sold at a foreclosure sale, then their issues are over.  Sure, their credit is damaged and they might not be able to buy another house for a few years but for the time being, their financial woes related to owning their home are over.  Unfortunately, that isn’t usually the case.

When you purchase a home, you sign a Promissory Note stating to the bank that you promise to pay a certain amount of money.  The Note doesn’t say you promise to pay for as long as you own the home, just that you promise to pay!  More often than not, homes that go into foreclosure are worth less than what is owed on the Note; the common term that is used to describe this scenario is “underwater.”  This means that when the bank attempts to sell the property at a foreclosure sale, it is rare that a third party purchaser will buy the property and the bank oftentimes repossesses the home.  When this happens, there is usually a deficiency.  This occurs when the amount of money owed to the bank is not satisfied by the sale of the home at a foreclosure sale.

After the sale occurs, the Court approves the accounting of the foreclosure sale known as the Auditor’s Report.  Upon final ratification of the Auditor’s Report, the Bank can then petition the Court to issue a Deficiency Judgment.  Once a Judgment is obtained, the Bank can start to liquidate other assets owned by the Debtor (in our example, Jane Doe) and can even garnish her wages in order to satisfy the Judgment.  Even more disturbing is the fact that the Bank does not have to do this immediately after the foreclosure sale is over; it can wait up to three years!  Under §7-105.13 of the Real Property Article of the Maryland Annotated Code, the secured party must request a deficiency judgment within three years after the final ratification of the Auditor’s Report.  This means Jane Doe’s responsibility to pay off the remaining debt continues for many years after the foreclosure sale has occurred.

The Deficiency Judgment is a post-foreclosure remedy that is available not only to mortgage foreclosures but also to foreclosures of other lien instruments as well, including unpaid condominium or homeowner’s association fees.  That’s right; you read that correctly, a condominium or homeowner’s association can foreclose on your home to collect unpaid assessments.  This is true even if the homeowner is up to date on all of his or her mortgage payments.

This post should act as a cautionary tale to borrowers to beware before they sign on that dotted line at the closing table.  Be sure you know what you can truly afford before finalizing the purchase of a home.  If you find yourself in trouble financially, don’t wait until the last minute to notify your bank or condominium/homeowner’s association.  A secured party is more likely to work with a borrower if they are up front and honest about their financial situation early on before late fees and other costs and expenses start to accrue (which is also added to the borrower’s total debt).  Walking away from a home that is underwater isn’t necessarily the best option to get out from under the debt, despite the fact that many people believe it is.  A foreclosure on your home doesn’t just ruin your credit; ultimately, it could affect your financial situation for many years to come.