WASHINGTON – July 7, 2015 – LB & B Associates, Inc., a North Carolina-based facility management and maintenance government contractor, has settled a lawsuit for $7.8 million, resolving allegations that the company made false statements to the U.S. Small Business Administration (SBA) in order to obtain and retain Section 8(a) certification as a minority and woman-owned business. The certification resulted in the unlawful award of set-aside contracts for various government agencies to LB & B. The complaint was originally brought by Steven Sansbury and James Buechler, former project managers for LB & B.

The complaint also alleged that LB & B continued to falsely obtain set-aside contracts after it “graduated” from the 8(a) program by making false statements to enter into the “Mentor-Protégé” program of the SBA through fraudulent joint ventures with small businesses.

The lawsuit, United States ex.rel. Sansbury and Buechler v. LB & B Associates, Inc., was filed in federal court in Washington, D.C., by attorneys Jay P. Holland and Brian J. Markovitz, partners at the Greenbelt, Md.-based law firm Joseph, Greenwald & Laake, P.A. Sansbury and Buechler will receive 19.8 percent of the settlement as the relators in the qui tam action.

Sansbury and Buechler’s complaint alleged that LB & B improperly obtained and retained its Section 8(a) certification and the lucrative set-aside contracts by falsely representing that Lily Brandon, the majority owner of LB & B, controlled the day-to-day business operations of the company, when it was her husband, F. Edward Brandon, who had years of experience in government contracting, who actually ran the company. Since F. Edward Brandon was not qualified to receive any benefits under the SBA program, the complaint alleged that Lily Brandon was used so the company could receive set-aside contracts for which it was not eligible to receive.

“The 8(a) program was set up to help minority-owned and minority-operated businesses compete on a level playing field against more established and better financed companies,” said Holland, who served as lead counsel.

“The purpose of the 8(a) program is to help disadvantaged business and not to take opportunities away from businesses that truly need the leg up,” added Markovitz, who served as co-counsel. “Steve Sansbury and Jim Buechler bravely came forward and persevered through years of litigation to remedy the injustice they witnessed.”

LB & B was required to certify annually to the SBA that it remained eligible for the Section 8(a) program from 1995 to 2004 and that Lily Brandon continued to control the operations of the company. The United States contended that those certifications were false. The government also contended that even after Lily Brandon resigned as president in 2005, LB & B continued to falsely market itself as a women-owned and women-operated business.

Even after graduating from the 8(a) program, the relators’ complaint alleged that LB & B continued to benefit from SBA set-aside contracts by acting as a “mentor” in the SBA’s Mentor-Protégé program to smaller entities and entering into joint ventures with those companies. The program requires that the joint ventures be staffed and managed by the “protégé” entities, but instead they were staffed by LB & B employees.

Holland also commented that “both the 8(a) and Mentor-Protégé programs serve vital and important public purposes. Taxpayer dollars are wasted when individuals evade the requirements of the programs to benefit themselves.” Holland praised Assistant United States Attorney Brian P. Hudak and Assistant Attorney General Linda McMahon, the attorneys who handled the case for the government, “for their determined pursuit of justice in this case. Mr. Hudak and Ms. McMahon stuck with us and our clients through years of litigation. They are public servants in the truest sense of the word.”

Counsel for Sansbury and Buechler filed their complaint in District Court on Feb. 1, 2007, captioned as United States ex. Rel. Sansbury, et. al. v. LB & B Associates, Inc, et. al. Civ. No. 07-0251 (EGS - D.D.C.). The United States intervened on April 14, 2011, as to the Section 8(a) claims only, and declined to intervene as to the Mentor-Protégé claims. Sansbury and Buechler continued to pursue the Mentor-Protégé claims even though the government declined to intervene in those claims.  Both claims were litigated and the Court denied motions to dismiss both complaints in July 2014; the settlement covers the intervened and declined claims.

Additional information via the Westlaw Journal: 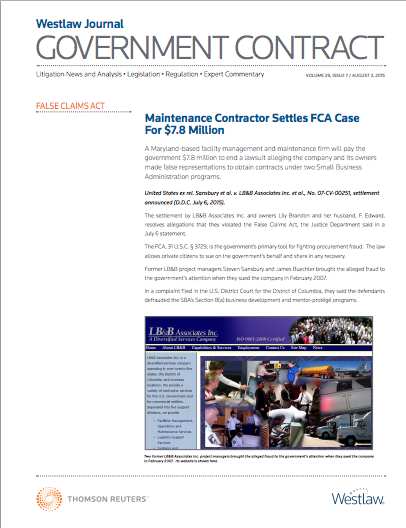